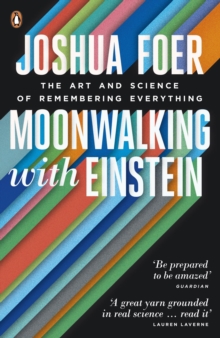 Back in 2006, I was on the jury for the Royal Television Society awards, in particular I was helping to judge the best Science & Natural History documentary. One of the entries was the Channel 4 film BRAINMAN (aka The Boy with the Incredible Brain), which told the story of Daniel Tammet, a savant with an incredible memory and language abilities, and who could perform complex mental calculations.

You may well be aware of Daniel, who has been interviewed by the likes of David Letterman and who published a bestselling book titled “Born on a Blue Day”. His skills are remarkable because he claims that they are somehow innate and partly reliant on his synaesthesia, and not the result of clever tricks and lots of practice.

For example, his talent at mental arithmetic is amazing, but it is shared by many other people around the world – what makes Daniel special is his claim to be able to do mathematics by looking at the shape and colour of each number. When multiplying two large numbers, Daniel imagines the shapes of the two numbers, and the answer corresponds to the shape that sits between the first two shapes. Moreover, shape supposedly helps Daniel spot any prime number below 10,000, because primes are apparently soft and round, like pebbles, whereas the so-called composite numbers are jagged.

When judging the prize, I was out of step with my fellow jurors, as I had serious reservations about the film. Was Daniel really a savant? A one-off? A scientific wonder? Or was he just like the other elite brain champions, who spend years developing their skills and who rely prosaic techniques. At the end of a lengthy discussion, everyone except me felt that BRAINMAN should win the prize. I asked for additional time, so that I could go away and research the topic further. Everyone generously indulged me, but it made no difference. A few days later I was still confused and everyone else was still a fan of BRAINMAN, so it won the prize.

So why I am blogging about this today?

At long last, exactly ten years after the prize was awarded, I now feel that I have a better understanding of what is (and is not) going on inside Daniel Tammet’s brain. I read a copy of MOONWALKING WITH EINSTEIN (The Art and Science of Remembering Everything), written by Joshua Foer and published back in 2011. Chapter 10 is largely about Daniel Tammet and in particular Foer questions the claims made in the BRAINMAN documentary.

Foer thinks the documentary failed to tell the whole story, and he explained this to Tammet: “Toward the end of our final meeting, I told Daniel all the reasons I couldn’t bring myself to believe that he, the world’s most famous savant, was truly a savant.”

I would like to thank Joshua Foer and his publishers for giving me permission to reproduce the chapter (below) about Daniel Tammet, so that you can join me in learning more about Tammet’s largely unknown backstory, which includes a brief stint as a psychic.

It is a long read, but fascinating and rewarding.

To avoid confusion, it might help to know that the chapter starts with the author’s account of his own journey to become a memory champion, before then moving onto the topic of Daniel Tammet. Also, I have edited out the middle of the chapter, which contained a fascinating detour examining the life of Kim Peek, the savant who inspired the character played by Dustin Hoffman in RAINMAN. You can read the missing section (and the rest of the book) by ordering a copy of MOONWALKING WITH EINSTEIN.

N.B. I invited Daniel Tammet to respond to the chapter from “Moonwalking with Einstein”. His comment can be found at the bottom of this page.

I invited Daniel Tammet (http://www.danieltammet.net/) to respond to the chapter from “Moonwalking with Einstein”. He offered the following comment:

Joshua and I met on three occasions. On each, I responded to all Joshua’s questions. In addition, I granted Joshua full access to my mother – whose home he visited without me – and permission (required for reasons of medical confidentiality) for him to speak with Professor Simon Baron-Cohen concerning the diagnostic interviews with me and my mother carried out at the Autism Research Centre at Cambridge University in 2004.

To my mind, Joshua confuses three different topics which would benefit from being considered separately. One, the mediatisation of savant abilities; two, the scientific and popular accounts of autism and savantism; three, my specific ‘case’. About the first, my second book ‘Embracing the Wide Sky’ (published in the UK and US in 2009) devotes several pages to a critical overview of media representations of savant abilities. And, recently, in my review of Steve Silberman’s book ‘Neurotribes’, published in the March 2016 edition of the scientific journal Brain, I return to this issue. Any suggestion that savant abilities are somehow supernatural or magical is completely unfounded.

Joshua raises the question of how to define a ‘savant’. He is right to highlight the debate over definitions in science and popular literature. Asperger syndrome was unheard of as a medical diagnosis when I was growing up in 1980s London; today, doctors recognise an ‘autistic spectrum’, and rates of detection and diagnosis have soared. In this context, the formerly prevalent notion of the ‘idiot savant’ – unsociable, Peter Pan-ish, mysterious – is clearly no longer viable. Joshua is wrong to regret its passing. He affirms that the word ‘savant’ has been drained of its original meaning, that of a sage or scholar. But even a cursory search in the OED shows that ‘savant’ still retains this definition as its primary meaning. In France, where I have lived for the past decade, both meanings are employed freely.

A related problem is Joshua’s attempt to compare my case with that of Kim Peek. The attempt is misguided, since Peek wasn’t autistic (he was born lacking a portion of his brain). To try to compare autism – a developmental condition – with a severe cerebral malformation like Peek’s makes no sense.

Which brings us to my specific case. Autism spectrum disorders are genetic in origin. My early childhood seizures; my father’s schizophrenia; my paternal grandfather’s epilepsy (for which he was institutionalised); and, my younger brother Steven’s Asperger syndrome diagnosis, are all matters of public record. It is regrettable that Joshua omits them. Regrettable, too, is Joshua’s failure to mention research that showed that, on the Navon Task, my split-second perceptions were consistent with high-functioning autism: quicker than non-autistic controls at identifying a visual target at the local level, and less distracted by interference at the global level. Moreover, social service reports concerning my family – dating back to my early adolescence, and released to me only in the past few years – provide documentary evidence of my developmental history. These records are presently in the possession of Professor Baron-Cohen at the Autism Research Centre.

Also held by the Centre are the full data from my performance on Professor David Eagleman’s Synaesthesia Battery Test, conducted in 2011. This test, unavailable at the time of my first testing in 2004 and 2005, is specifically designed to distinguish synaesthetes from non-synaesthetes who use memory or free association. On both the scores of consistency, and automaticity of synesthetic sensations (evaluated by high accuracy on a speeded consistency test), I passed.

It is important to add that Joshua did not participate in any of the scientific testing involving me. He claims that I responded differently to the same number (9,412) during our various meetings, but these meetings were informal and the number each time given verbally (in actual testing, stimuli are always presented visually to avoid mishearing or variant pronunciations). Responding, for example, to someone saying ‘nine four one two’; to ‘ninety-four hundred and twelve’; and to ‘nine thousand four hundred and twelve’ would produce different answers.

Similarly, Joshua draws an overhasty (or pre-made) conclusion when he discusses my impaired ability to recognise faces. He refers to a scientific test which demonstrated this impairment, and contrasts it with a sort of public memory game on which I performed well several years prior to the testing. But, again, Joshua compares two very different things. Unlike the test, the game only required participants to form a mental link between a made-up name (presented under each photo) and a salient detail in the photo (an eyebrow piercing, a spotted bowtie, an item of furniture in the background, etc.). The game actually favoured detail-oriented perception such as mine.

I conclude with a comment made to me by the neuropsychologist Charles Leclerc at the University of Ottawa. For Leclerc, what researchers (and my readers) find most interesting about my life and perceptions is not any one particular ability (indeed, some learn to do mental sums much more quickly than I ever could, or speak more languages, or remember more digits of pi, etc.) but rather how generalised my abilities are. Like many adults on the high-functioning end of the autistic spectrum, I have learned to adapt socially. I have also learned to write. Alongside my non-fiction works, articles and poems, I have produced a collection of literary essays (‘Thinking in Numbers’), translated into French the poetry of the Australian Nobel Prize in Literature candidate Les Murray and, last month in France, published ‘Mishenka’, my first novel.