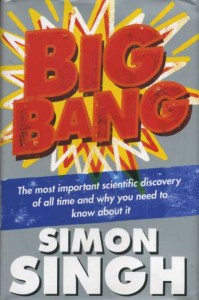 Singh’s brazen use of the actual science is a useful for two reasons. First, it affords a respect to the reader so often missing from “wow, isn’t science cool?” books and shows exactly what the scientists of yesteryear were dealing with when they came up with their ideas. Second, it shows science for what it is: ideas, arguments and, ultimately, the consensus of the establishment.

Everyone knows what the big bang is – or so they think – but this seemingly simple idea is the result of centuries of impassioned disagreement. The politics, the ideas dismissed by the establishment as heresy and, above all, the personality clashes between leading scientists are laid bare – as is the creativity ingrained in the subject. And, as Singh shows, coming up with a theory of how the universe began is possibly the most creative thing of all.

Simon Singh’s new book, Big Bang, should be warmly welcomed. Singh made the publishing world sit up and take notice when his debut, Fermat’s Last Theorem, became the first book about mathematics to make the best-seller lists. With Big Bang, he has turned his attention to the origins of the universe, and writes so clearly about it that the layman can breeze straight through, easily grasping each step on the way.

Following his study of mathematical ingenuity in “Fermat’s Last Theorem” and of cryptography in “The Code Book”, Simon Singh comfortably bestrides the universe in “Big Bang”, encompassing time and space in a sweeping historical narrative of the scientific imagination at work. But he also gives science a deeply humanistic, humorous, down-to-earth spin.
This is an epic tale brilliantly told, packed with courage and tragedy, heroes and martyrs, with one or two jokers in the pack.

Simon Singh’s book, a history of the evolution of the [Big Bang], begins with Eratosthenes, who, in about 200 BC, stuck a stick in the ground and used the resulting shadow to work out the circumference of the earth, using one of the stunning examples of lateral thinking in history… Singh is a very gifted storyteller who never misses the chance to make his subject clearer or more entertaining… Singh is also fastidious about crediting the true pioneers of science. We learn, for example, of the team of brilliant women ‘computers’ who were brought in to analyse celestial photographs at the Harvard College Observatory. One of these women, Henrietta Leavitt, made one of the most important breakthroughs in 20th century astronomy.

With Simon Singh there is no beating around the bush. His previous books, Fermat’s Last Theorem and The Code Book, took apparently arcane and inscrutable subjects and cracked them open for the general – and generally innumerate – reader, to reveal whole histories of human thought and feeling. In his new book he tackles life, the universe and everything head on, with equal relish … Singh’s unerring eye for picturesque anecdote and his capacity for simplifying complex scientific ideas is a winning formula.
… Along the way, Singh uses beautifully simple analogies and clearly explained diagrams to enable even the most mathematically hobbled of us to recapitulate the history of man’s intellectual engagement with the dark spaces around him. For the reader, the effect is like walking on water. We know that there are any number of difficult equations squirming below, but led by the hand so charmingly by Singh, we suddenly find ourselves on the other side, apparently understanding it all.

The great debate between the Big Bangers and Steady Staters forms the centrepiece of Simon Singh’s book. Readers of Singh’s two previous books, on Fermat’s last theorem and the history of code-breaking, will know he is a gifted expositor, ready to venture to places other science popularisers don’t even try to reach. Here he uses his powers to put the Big Bang debate in context, laying out the history of cosmology and explaining the details of the theories behind the headlines.
… Anybody who wants to understand this wonderful achievement will not do better than start with Singh’s book.

For a comprehensive yet eminently comprehensible account of how cosmologists pieced together the history of the universe, turn to the latest book by Simon Singh, a British science writer best known for his bestselling account of the solution of Fermat’s last theorem.

From the Greeks to Einstein, through Copernicus and Newton, Mr Singh deftly places brick upon brick, building up to the modern Big Bang theory and its observational verification with the discovery of its afterglow, the “cosmic microwave background”.

The book’s broader theme is the working of science itself, and how new theories are proposed, challenged, tested and then accepted or discarded. This is particularly instructive given the religious overtones of the cosmological debate.

Many of the stories are familiar, but as in his previous books, Mr Singh explains even the most complicated ideas with subtlety, grace and wit. His explanation of relativistic time dilation, which causes fast-moving clocks to appear to be running slowly when viewed by a stationary observer, is exemplary.

Roll up for the greatest story ever told! It is an adventure story, and one of the great ones.

If you are intrigued by the story but wary of mathematics, do not worry; Simon Singh spares us most of the maths, and he juggles big ideas with tact and care.

“Death is an essential element in the progress of science,” Simon Singh writes, “since it takes care of conservative scientists of a previous generation reluctant to let go of an old, fallacious theory and embrace a new and accurate one.” Which is good for the reader, because the history of the Big Bang theory is peppered with animosity, arrogance, harsh debates and unexpected triumphs.

In his highly readable book ‘Big Bang’, Simon Singh races through the history of the search for a scientific creation theory … Singh brings the colourful protagonists in his story to life in countless anecdotes.

Singh is one of the best science journalists writing today. With his impressive gift for explaining extremely difficult physics, he takes us on a very human intellectual journey in pursuit of the origins of the universe. The drama of ideas and personalities that broke the iron grip of the notion of an eternal and unchanging universe enables us to come to terms with the history of time, space and the birth of our world. Singh insists that cosmology is not just for the eggheads; it is possible, and indeed essential, for us all to share in the insights of the great physicists.

The unique selling point of this book is not the subject matter. It is the classic simplicity and clarity of Singh’s writing, coupled with a diligent programme of research well beyond the means of almost all his competitors. I have seldom come across a science book that is easier to read.

A superb summary of one of science’s most popular topics.