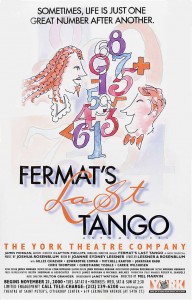 One of the more bizarre spin-offs from the story of Fermat’s Last Theorem is that of Fermat’s Last Tango, a musical inspired by the story of the Princeton professor Andrew Wiles and his search for the proof. The musical was produced by the Clay Mathematical Institute, an organisation dedicated to education in mathematics. Husband and wife team Joshua Rosenblum and Joanne Sydney Lessner took the show on the road in November 2000. Since then it has toured universities, mathematics institutes and mainstream theatres alike.

The story centres on that of Andrew Wiles, re-named here as Daniel Keane. It tracks the agonising months endured by Keane as he realises his much-heralded proof of Fermat’s Last Theorem contains a major error. With the full glare of the worlds media and academia on him, Keane sets about fixing this flaw, and in a surreal twist to the real-life events, is aided by the newly resurrected Fermat himself, alongside Pythagoras, Gauss, and Euclid.

The show has been filmed and I was lucky enough to see the first UK screening at Oxford University in February, 2002. It was a hoot. You can buy the DVD via the Clay Institute.

So what does Andrew Wiles make of it all?

“I went with my whole family, and yes, we really liked the show. My six year old was quite captivated by Fermat (or Theorem as she called him) and kept trying to tell me something during the performance. I couldn’t hear what she was saying but afterwards she told me she had wanted to tell me that he was lying and that he didn’t have any proof! I think that putting Fermat in the role of tormentor was very inspired and really was the key to the success of the show – both as he personified the struggle that research in mathematics involves and also as he gave vent to some of the all too human characteristics of real life personalities in math.”

I think that it did especially capture the feeling that one sometimes has when one is doing mathematics that obstacles have been put there deliberately to taunt you but also the feeling of wonder at the beauty and simplicity of it all when one finally sees the light. I thought the use of the Aftermath very clever, as well as the use of the mathematicians to carry the storyline. But we also really liked the portrayal of the personal part of the story – the whole idea of the threesome at the tango was beautifully done. We came away feeling that it had been very intelligently written (not something I could say for every musical!) and that the cast really seemed to have caught the spirit of the story.”