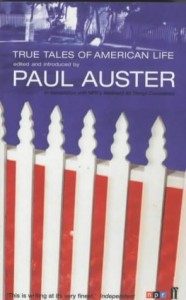 Click on the image to go straight to Amazon.co.uk

I came across this rather sweet story by Alex Galt about a year ago. She wrote it for a compilation of short stories called ‘True Tales of American Life’ by Paul Auster. The book was written in aid of National Story Telling Week, and this story just goes to show how mathematics can play a part in all facets of life…

In the days when John and I used to break up all the time, we made a decision to see each other only casually. Dates were okay, but no more than once a week. We were going to lead separate lives, getting together occasionally when the spirit moved us, but without worrying about commitment.

One day at the beginning of this period, we were sitting together on the floor of John’s one-room apartment. He was knitting himself a sweater and I was reading Fermat’s Last Theorem. Every now and then, I’d interrupt his knitting to read him passages from my book.

“Did you ever hear of amicable numbers? They’re like perfect numbers, but instead of being the sum of their own divisors, they’re the sum of each others divisors. In the Middle Ages people used to carve amicable numbers into pieces of fruit. They’d eat the first piece themselves and then feed the other one to their lover. It was a mathematical aphrodisiac. I love that – a mathematical aphrodisiac.” John showed little interest. He doesn’t like math much. Not like I do. It was one more reason for us to be casual.

Christmas fell during this period, and since I hate to shop, I was glad to be able to cross John off my shopping list. We were too casual for presents. While I was shopping for my grandmother, however, I saw a cryptic crossword puzzle book and bought it for John. We had always worked on the cryptic crossword puzzles at the back of The Nation, and for five bucks I figured I could give it to him.

When Christmas rolled around, I handed John the book – unwrapped, very casual. He didn’t give me anything at all. I wasn’t surprised, but my feelings were a little hurt, even though I wasn’t supposed to care. The next day, John invited me over to his apartment. “I have your Christmas present” he said. “Sorry it’s late.”

He handed me an awkwardly wrapped bundle. When I pulled it open, a rectangle of hand-knit fabric fell on my lap. I picked it up and looked at it, completely confused. One side had the number 124,155 knitted into it; the other side had 100,485. When I looked up at John again, he was barely able to contain his excitement anymore. “They’re amicable numbers,” he said. “I wrote a computer program and let it run for twelve hours. These were the biggest ones I found, and then I double-knit them in. It’s a pot holder. I couldn’t give it to you last night but I still haven’t figured out how to cast off. It’s kind of geeky, but I thought you might like it.”

After that Christmas, we were a lot of things, but we weren’t casual anymore. The ancient mathematical aphrodisiac had worked again.