In addition to the article below, you can read an interview with Andrew Wiles at the Nova website. 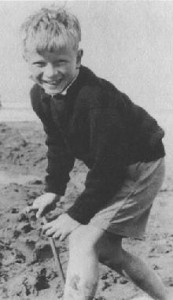 I first met Andrew Wiles when I began researching for a BBC documentary about his proof of Fermat’s Last Theorem. Although he was clearly a man with a brilliant mind, an immense determination and an obsession that had haunted him since childhood, he came across as a modest, diffident man. It was obvious that he hated publicity, so it was not a complete surprise that initially he was reluctant to have his story filmed for TV.

Eventually, my colleague, John Lynch, persuaded him that it was his duty to be filmed. By telling his story on screen, Wiles could inspire a new generation of mathematicians and reveal the power of mathematics to the public. Here was a story of passion and intrigue that would enchant people around the world.

Wiles first became aware of the Last Theorem when he was ten years old. On his way home from school he popped into the Milton Road library and began reading The Last Problem by Eric Temple Bell. From that moment on, he dedicated his life to finding a proof, even though this was something that had eluded the greatest brains on the planet for three centuries.

He completed his PhD in mathematics under the supervision of John Coates and eventually became a professor at Princeton University. His research was in number theory, but was not aimed at Fermat’s Last Theorem. Three hundred years after Fermat had thrown down the gauntlet, mathematicians had decided to put Fermat’s Last Theorem to one side because they considered it impossible. For example, the mathematician David Hilbert was asked why he did not attempt a proof of the Last Theorem, and he replied, “Before beginning I should have to put in three years of intensive study, and I haven’t that much time to squander on a probable failure.”

But in the 1980s, work by Ken Ribet and Gerhard Frey built a bridge between the Last Theorem and mainstream mathematics, in particular the sort of ideas that Wiles was already familiar with. To cut a long story short, Wiles now had to prove the Taniyama-Shimura conjecture, a problem that had been around for decades and which was considered impossible. Nevertheless, as far as Wiles was concerned, anything that led to Fermat’s Last Theorem was worth pursuing. For the next seven years, Wiles worked in complete secrecy, formulating the proof of the century.

Wiles’s incredible journey is too long to even begin to explore on this page, but it is best summarised by the following quote by Andrew Wiles, which draws an analogy between doing mathematics and exploring a dark mansion:

“You enter the first room of the mansion and it’s completely dark. You stumble around bumping into the furniture but gradually you learn where each piece of furniture is. Finally, after six months or so, you find the light switch, you turn it on, and suddenly it’s all illuminated. You can see exactly where you were. Then you move into the next room and spend another six months in the dark. So each of these breakthroughs, while sometimes they’re momentary, sometimes over a period of a day or two, they are the culmination of, and couldn’t exist without, the many months of stumbling around in the dark that precede them.”

In 1995, Wiles’s proof was officially published and accepted by the mathematical community. The story of Fermat’s Last Theorem had come to an end. We now know that Fermat’s Last Theorem is true, but one question remains. What was Fermat’s original proof? Wiles’s proof is too complicated to be the same as Fermat’s, so some people continue to search for the original proof – if, indeed, such a proof exists – it could be that Fermat made a mistake and never had his own proof. If you think you have discovered Fermat’s proof, then please do not send them to Andrew Wiles as he does not have the time to look at such proofs. Similarly, I have neither the time, nor the expertise, so please do not send proofs to me.

On 27 June, 1997, Wiles collected the Wolfskehl Prize, which was worth roughly $50,000. This is much less than Wolfsekhl had intended a century earlier, but hyperinflation had eroded its value. The mathematical equivalent of the Nobel Prize is the Fields Medal, but winners must be younger than forty, so Wiles just missed out. Instead, he received a special silver plaque at the Fields Medal ceremony in honour of his momentous achievement.

Wiles also won the prestigious Wolf Prize, the King Faisal Prize and numerous other international awards. But money, awards and honour were not the driving force behind Wiles’s achievement. As he said in the BBC documentary:

‘This was my childhood passion. There’s nothing to replace that. I had this very rare privilege of being able to pursue in my adult life what had been my childhood dream. I know it’s a rare privilege, but if you can tackle something in adult life that means that much to you, then it’s more rewarding than anything imaginable. Having solved this problem there’s certainly a sense of loss, but at the same time there is this tremendous sense of freedom. I was so obsessed by this problem that for eight years I was thinking about it all the time – when I woke up in the morning to when I went to sleep at night. That’s a long time to think about one thing. That particular odyssey is over. My mind is at rest.’