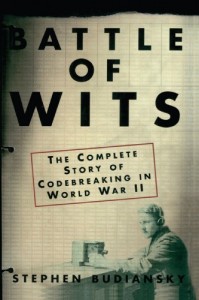 Not just the story of Bletchley Park, but also the story of the American codebreaking achievements against the Japanese.

The story of cryptography in the Second World War is one of the great scientific tales of the twentieth century, and Budiansky has succeeded in telling it with enthusiasm and insight, delivering a book with style and substance.

Because so much has already been written about Bletchley Park, many readers may find the American sections of the book more refreshing. It has been well documented how Bletchley Park gave the Allies an advantage in every arena from the Atlantic to North Africa, but much less has been written about the codebreakers at Arlington Hall, a former finishing school for girls near Washington, who changed the course of the war in the Pacific.