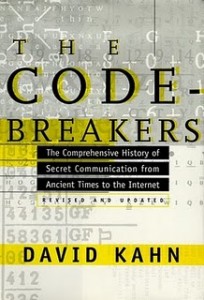 David Kahn is undoubtedly the world’s most respected historian of cryptography and this book is the definitive work on the subject. 1200 pages of narrative and explanation cover every crypto-story imaginable.
The book was first published in 1967, and at the time it was highly controversial because cryptography was such a secretive subject that only serious research was going on behind closed doors. It was partly responsible for inspiring a new generation of researchers in universities, including Martin Hellman, who used it as his first introduction to the subject.
The original book stopped its account soon after the First World War, but the new edition (published in the 1990s) has an additional chapter that races through more recent developments, including Bletchley Park and the cracking of the Enigma cipher, which was still top secret when the book was first published.
This is a readable and scholarly work, and detailed notes and references will help those readers who still want to find out more.

An absolute must for anybody interested in the history of codes and codebreaking.