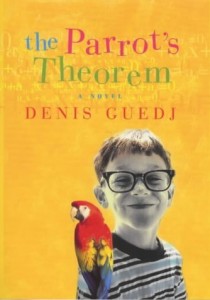 “The Parrot’s Theorem” is neither as gripping as a Stephen King novel nor as literary as a Booker Prize winner, but then again it seems to have a distinctly difference objective from most other fiction, which is to cleverly smuggle mathematical concepts into the mind of the unsuspecting reader by wrapping the mathematics inside an engaging plot.

The bizarre plot concerns a mathematical hermit in the Amazon jungle, an evil criminal genius, a murder mystery, a Parisian bookseller and a deaf child, Max, who encounters an exceptionally eloquent parrot. Along the way, Max learns about two thousand years of mathematics, which means that there are large sections discussing topics such as geometry, arithmetic, zero, imaginary numbers and calculus. Non-mathematicians will find some of these pages heavy going, but if they can persevere and comprehend the lines of logic then the consequence will be a genuine insight into the wonder of numbers.

Unfortunately, no easy alternative exists when it comes to learning about mathematics, as Ptolemy II learned when he asked Euclid if there was a shortcut to understanding geometry. Euclid replied, “There is no royal road to geometry.’

The plot is just about engaging enough to maintain the reader’s momentum through the didactic sections. If further sustenance is required, readers can look forward to Guedj’s charming historical detours. For example, he describes the ethos of the Pythagorean Brotherhood.

When a disciple entered the Brotherhood, he had to give all his worldly goods to the community. For five years students could only listen to Pythagoras’s teaching from behind a curtain. During this apprenticeship they were known as exoterics, but if they passed all the tests they became esoterics and were permitted to sit alongside the great teachers.

Those that failed to the tests of the Brotherhood were expelled, but were given twice the value of the goods that they had originally contributed. If they could not gain intellectually, then they should be compensated materially. A grave was dug within the grounds of the school, symbolising the tragedy of having lost a potential mathematician.

So Guedj’s novel contains a pleasant plot, some excellent mathematical lectures and great historical tales, but how does it compare to compare to books about real mathematics? Perhaps I am biased, but none of the fictional mathematics that I have so far read (and there have been quite a few recently) quite match the standard of the narrative non-fiction that is currently being published.

Several biographies of real mathematicians already exist, whose stories are as rich and dramatic as those contained in “The Parrot’s Theorem”. Paul Hoffman’s “The Man Who Loved Only Numbers” is a brilliant biography of Paul Erdös, one the great mathematicians of the twentieth century, who dedicated his entire life and sacrificed everything in order to prove mathematical theorems. Erdös also had a penchant for one-liners that are as witty as any that could be fabricated by a novelist.

An equally impressive work of non-fiction is Sylvia Nasar’s “A Beautiful Mind”, the story of John Nash, who did his greatest mathematics in his twenties before succumbing to paranoid schizophrenia. The book is an elementary introduction to game theory, but it is also a romance, a tragedy and an examination of madness and its treatments in the 1950s and 1960s.

In both of these cases, the truth is stranger than any mathematical fiction.

Buy it on Amazon.co.uk