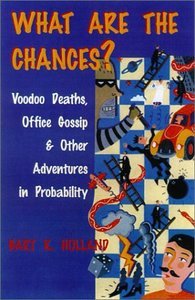 If you have ever wondered about the chances of a Prussian cavalryman being kicked to death by his horse or if you prefer to work out your own life expectancy by staring at life tables, then Bart Holland’s excellent primer in probability is a great place to start. He even explains Henri Poincaré’s technique for finding out if your baker is diddling you.

An unexpected strength of the book is Holland’s discussion about testing hypotheses, which illustrates how probability is an inherent part of so much scientific analysis. For example, in the Second World War, Londoners frequently asserted that Germany was targeting its V2 bombs because they fell in clusters, but there was no known technology that could achieve such accuracy.

To test the targeting theory, London was divided into 576 squares. While 440 squares suffered no hits or one hit, 35 squares received 3 hits and 8 squares received 4 or more hits. Intuitively, this feels like targeting, but in fact the data is a very good fit to a Poisson distribution, implying that the bombs fell randomly. Of course, the same approach can be used to determine whether the clustering of disease or anything else is significant or coincidence.

In a time when anecdote and panic seem to influence public policy more than objective analysis, Holland has provided a welcome reminder of the power of the analytical approach. Stephen Jay Gould once wrote that a misunderstanding of probability may be the greatest of all impediments to scientific literacy. The problem is that the people who read this book are probably those who already to some extent appreciate the scientific method.