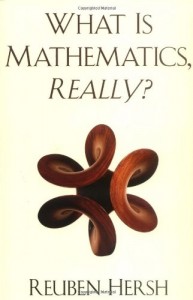 A thought-provoking investigation into the philosophy of mathematics.

Forty years ago, well before he had even considered becoming a mathematician, Reuben Hersh encountered the classic text “What is Mathematics?” by Richard Courant and Herbert Robbins. In his preface Hersh recalls how he felt cheated by their explanation, and describes how this dissatisfaction ultimately became the motivation for writing “What is Mathematics, Really?”

In search of a new philosophy of mathematics, Hersh explores what he calls the back of mathematics, a concept developed by the American sociologist Erving Goffman. Goffman described how many establishments have a “front” and “back”. For example, in a theatre the frontstage is what we, the audience, are familiar with, whereas the backstage is restricted to those involved in the production. If one wanted to develop an understanding of theatre the audience’s view of the frontstage is not a bad place to start, but it is far from a complete picture of what theatre is. A backstage view is also required, for it is here that actors put on make up and change costumes, while the stagehands switch sets and the lighting crew are at work.

Despite the book’s claim to be “easily comprehensible to anyone”, readers without a background in philosophy or mathematics might find it a little difficult at times. On the whole, however, his backstage view of mathematics is thought-provoking and elucidating.