(a.k.a. The Physics of Christmas in America) 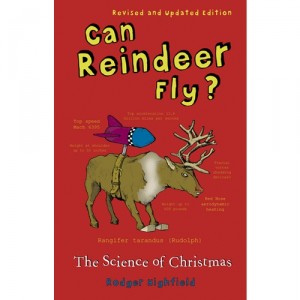 Each year, science journalist Roger Highfield searches for stories with a Christmas angle; the evolutionary origin of gift giving, the mystery of the Star of Bethlehem, how reindeer fly, cloned Christmas trees, and anything else that might add a festive flavour to his weekly column in London’s Daily Telegraph newspaper. He has now gathered together these stories in a delightful compendium of seasonal science.

Many might feel that scientific analysis of festive phenomena would destroy the spirit of Christmas. Indeed this is possible, as demonstrated by British scientist Richard Dawkins. In his book Unweaving the Rainbow, he explains that Santa would have to travel faster than the speed of sound to visit all the children in the world in a single night. Hence, as he accelerates to and from each house, his sleigh would break the sound barrier, thereby generating a tremendous shock wave and a sonic boom. Because we never hear this sonic boom, Dawkins claims that Santa does not exist. In fact, he proudly admits to using this argument to disprove the existence of Santa to a six-year-old child.

However, Highfield’s approach to the science of Christmas is quite the opposite. Relying on the research of an eminent list of scholars from around the world, he endeavours to enrich our understanding of everything associated with Yuletide, providing genuine insights as well as fanciful speculation. For example, the reason why we do not hear deafening sonic booms on Christmas Eve is that Santa’s sleigh is fitted with an antinoise mechanism. Sound can be thought of as a series of peaks and troughs. The sleigh emits a noise to accompany the sonic boom, such that a peak in the boom is matched by a trough in the emitted noise, and vice versa. The result is that the sonic boom is cancelled, and we are left with a silent night.

Although the title of the book is “The Physics of Christmas”, it covers a whole range of scientific topics, including a detailed analysis of the hangover, the explanation behind the strange taste of brussels sprouts, and the hunt for the perfect Christmas tree (a straight trunk which slips easily into the stand, limbs angling upwards at forty-five degrees, a uniform conical shape tapering downwards at forty degrees, and good needle retention). There are also chapters covering the sociological and psychological aspects of Christmas.

In 1944 the psychologist Richard Sterba drew some extraordinary parallels between Christmas celebrations and the customs surrounding childbirth: the preparatory excitement, secret anticipation, the last-minute flurry of activity, and delivery of a gift, whether it is a baby or a pair of socks. Sterba stated, “It is not surprising that the presents come down the chimney since the fireplace and chimney signify vulva and vagina in the unconscious. This casts some light on the figure of Santa Claus. He, no doubt, is a father representative”. According to Sterba, those people who hate Christmas are reminded of their unconscious and unresolved conflicts about childbirth.

One hypothesis with slightly more evidence to back it up is the theory that Christmas has a death defying effect. It appears that people on the verge of dying can strike a deal with God (or exercise willpower) in order to live for a few extra days and experience a final family gathering. The best evidence for this theory comes from a study of Jewish men who died in the weeks either side of the Passover festival. The advantage of studying Passover, rather than Christmas, is that its date is not fixed, and so the effect of the festival can be distinguished from the impact of seasonal factors. The results showed that deaths increased by 25% in the week after Passover. The effect rose to 61% when Passover fell at the weekend, presumably because family gatherings are larger, and the desire to survive even greater. It is interesting to note that John Adams and Thomas Jefferson died on July 4, 1826, summoning up the extra strength required to witness the fiftieth anniversary of the signing of the Declaration of Independence.

In addition to the science, Highfield also examines the history of the festival, from Christmas cards to the origin of Santa. The inspiration for Santa seems to be the generous St. Nicholas, born around AD 245 in the town of Patara in Turkey. The story of most relevance tells how Nicholas secretly deposited three bags of gold in a house, so that a father could pay for the marriages of his three daughters. Interestingly, legend says that he sneaked the third bag into the house by dropping it down the chimney, which may give rise to the modern interpretation of Santa’s preferred method of delivering presents.

If St Nicholas is the original Santa, and his home is Turkey rather than Lapland, then perhaps sunburn is the explanation for Rudolph’s red nose. Alternatively, if Rudolph does reside in the Arctic, then parasitic infection may be the cause of his inflamed proboscis. Reindeer noses contain an elaborate concentration of folded membranes, which act as heat exchangers. Inhaled cold air is rapidly warmed as it enters the body, and exhaled air is cooled before leaving. This helps the animal to retain heat, and also reduces moisture loss. In the journal “Parasitology Today,” Odd Halvorsen of the University of Oslo pointed out that the warm, humid respiratory system provides a comfortable home to many parasites, including twenty that are unique to reindeer. Hence, Halvorsen suggested that Rudolph’s “celebrated discoloration” is the result of parasitic infection.

Inevitably, Highfield includes a few seasonal science stories that will be familiar to many, such as the mystery of Santa’s incredible annual present-giving escapade, but even the old chestnuts are spiced up with the latest research. In 1994 I worked on a television program which suggested that Santa’s exploits were thanks to quantum teleportation. Scientists had only just completed some very tentative experiments, but it seemed that Santa’s Artic laboratory had mastered the technology. Highfield describes this and other similar theories, such as warp-drive sleighs, wormholes, and surfing on the crest of space-time wave, and adds another, more believable theory.

Professor Ian Stewart of Warwick University says, “Reindeer have a curious arrangement of gadgetry on top of their heads which we call antlers and naively assume exist for the males to do battle and to win females. This is absolute nonsense. The antlers are actually fractal vortex-shedding devices. We are talking not aerodynamics here, but antlaerodynamics.” This phenomenon arises on the wingtips of Concorde, but it is only apparent on antlers at very high velocity. However, in order to deliver all the presents, the reindeer have to fly at speeds of 6,000 times the speed of sound, far in excess of the speed required for antlers to generate lift.

As a final thought, it is worth noting that the American editors took the decision of removing two chapters that are part of the British edition of the book. One chapter relates to a peculiarly British delicacy, and its omission is quite understandable. The other chapter concerns the Virgin birth. I presume that the editors wanted to steer clear of any controversy, and therefore took the safe option. The result is that they have lost of one of the most thought provoking chapters, one that would only have contributed further to an already enchanting scientific celebration of Christmas.