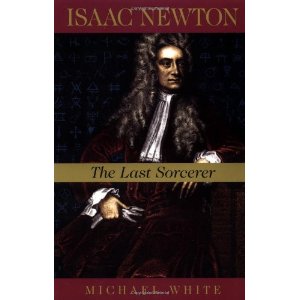 Isaac Newton’s PRINCIPIA is arguably the most significant publication in the history of science, and without doubt its author was the greatest scientist this nation has ever produced. Michael White’s biography does describe the great man’s scientific achievements, but the real focus of this book is the background to Newton’s tormented personal life, which created such an isolated, obsessive, cruel genius.

Newton’s early childhood was marked by rejection and hatred. His mother, Hannah, was widowed before Isaac was born, and when she remarried her new husband refused to accept her three-year-old son into his home. Eight years later, when she was widowed again, Hannah was reunited with Isaac, but the pain of being abandoned was never forgotten. As an undergraduate at Cambridge, Newton confessed his childhood sins in a notebook, which included, “Threatening my father and mother Smith to burne them and the house over them.”

An embittered man, Newton lived a life full of vengeful disputes, including long-running battles with John Flamsteed over access to astronomical data, with Gottfried Wilhelm von Leibniz over who invented calculus, and with Robert Hooke over virtually everything imaginable. White does not skimp when describing these hostile conflicts, and provides valuable insights into the machinations which surrounded the publication of PRINCIPIA.

As the sub-title suggests, throughout the book there are descriptions of Newton’s secret life-long fascination with alchemy. Newton wrote over a million words on the subject, but this did not make him unusual within the community of scientists – many other members of the Royal Society privately shared Newton’s obsession. Alchemists tended to work in secret to avoid the wrath of the church and prosecution under an anti-alchemy law passed by Henry IV. Subsequent monarchs were slightly more tolerant, hoping that discovery of the philosopher’s stone might help the Crown pay off its debts, but the law remained in force and alchemists continued to conduct their research behind closed doors.

White gives an enlightening account of Newton’s exploits in alchemy and his scientific research, but he also attempts to go one step further by arguing that the former influenced and inspired the latter. His controversial argument is not wholly convincing, and merely distracts from an otherwise fascinating biography. Even beyond the world science Newton led an eventful life, which included a period as Master of the Royal Mint. Until Newton reformed the nation’s currency, Britain was on the point of economic collapse. Most importantly he introduced milled coins, which prevented the practice of clipping – the removal a coin’s edge and turning clippings into new coins. He went on to frequent brothels and bars in an effort to hunt down counterfeiters, who he would have hung drawn and quartered. Here was a scientist who could explain gravity, create calculus, humiliate his rivals, dabble in alchemy and still have time to torture counterfeiters – those were the days!