… a few pictures that illustrate the closing phases of the competition. 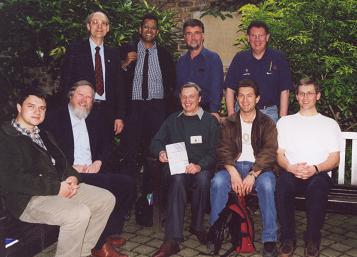 I met hundreds of people who had taken up the challenge. This photo was taken by Terry Froggatt at a crypto conference in Oxford with cipher challengers from four countries. It was great meeting such people, but I always had to be careful to avoid giving away clues. 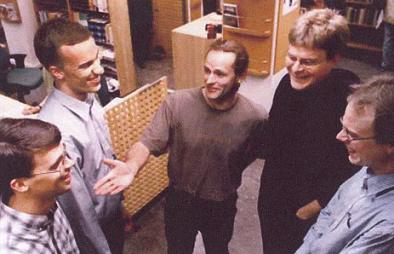 Eventually, after 13 months of codebreaking efforts, the Stealth Swedes cracked all ten stages of the Cipher Challenge. The race was over. 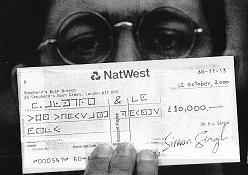 I drew up a cheque for the winners. I encrypted it, hoping that the bank would not cash it, but my plan failed.

This picture appeared in the Daily Telegraph, whose science editor Roger Highfield wrote an article about the end of the competition.

After a week or two, I flew to Stockholm to present the cheque in person to the winners. The Royal Institute of Technology organised a prize ceremony, which included a lecture by me about how I made the Challenge and a lecture by the winners about how they cracked the codes. 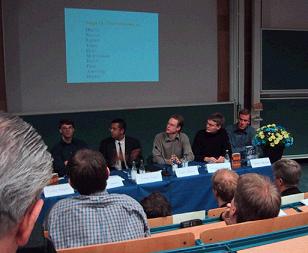 There was also a panel discussion with me and the winners, shown here.

And I suppose this marks the end of the Cipher Challenge. This is me revealing
how I created the Challenge, giving away for the first time the keys needed to crack it.This is clearly a very important moment, because I am wearing a suit and not a cardigan. 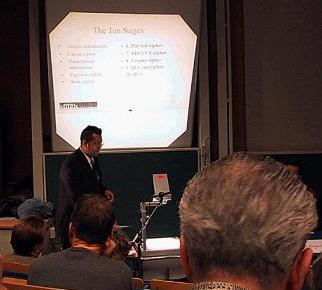 This picture was taken by Erik Tjernland.