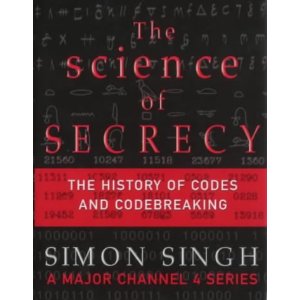 The Science of Secrecy is a 5-part Channel 4 series presented by me, which brings to life the hidden history of codes and code breaking. It was first aired in October 2000. Although based on The Code Book, the series has its own specially adapted book tie-in entitled The Science of Secrecy. The series won the Vega Award for science broadcasting in 2001.

Unfortunately, the series is not available on DVD, but clips are available on the free downloadable CD-ROM version of The Code Book.

Since the birth of writing, there has also been the need for secrecy. The story of codes is the story of the brilliant men and women who used mathematics, linguistics, machines, computers, gut instinct, logic and detective work to encrypt and break these secret messages. And, of course, when codes are broken the impact on history can be dramatic.

In each episode of The Science of Secrecy, I tell a story from the history of codes: how Mary Queen of Scots was trapped by her own cipher; how the cracking of the ‘unbreakable’ Vigenère code remained a Victorian secret, hushed up by the British government; how the well-timed cracking of a single encoded telegram altered the course of World War One, and how the mysteries of the Rosetta Stone were revealed, resulting in the decipherment of Egyptian hieroglyphs.

According to the organisers, “The Vega Awards were designed to showcase those producing the very best in scientific broadcasting, with an emphasis on scientific content.”

The judges commenting on The Science of Secrecy said: “A lucid and well thought through explanation of a potentially dry subject made not only highly entertaining but also educational. This programme has won the Vega Main Prize partly because basic mathematical concepts involved in modern approaches to safeguarding information were well explained wherever possible. Another reason is the fact that the key personalities involved were creatively interviewed and their story told within a fascinating subplot in which the efforts of the British mathematicians, who found the solution, were veiled in secrecy whereas the US mathematicians who solved it 5 years later have gone on to found a multi-billion dollar company to exploit its value on the Internet.”