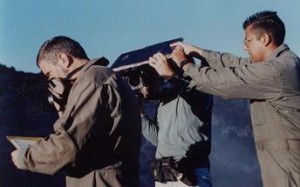 Me filming volcanoes in Hawaii for the BBC Earth Story series

I have always been a telly addict and I have always loved science, but it was not until I was 25 that I started making TV science programmes.

I worked as an assistant producer, director and producer on BBC1’s Tomorrow’s World, before then working with John Lynch on a Horizon documentary entitled “Fermat’s Last Theorem”. You can find details of this programme and the story behind how it was made in the Fermat’s Last Theorem section (under the books section). And you can watch the documentary online at the BBC website (UK only) or at Vimeo).

I would encourage you to watch the documentary, even just the first three minutes, whether you love mathematics or hate the subject. The film won a BAFTA in 1997 and was nominated for an EMMY after it was broadcast in America with the title “The Proof”.

I have presented two series on TV, but unfortunately neither is on DVD. First, “The Science of Secrecy” on Channel 4, which was a TV version of my book “The Code Book” – you can watch the episode about public-key cryptography here. This was followed by a puzzle show called Mind Games on BBC4.